The Erewash constituency: A bit of information 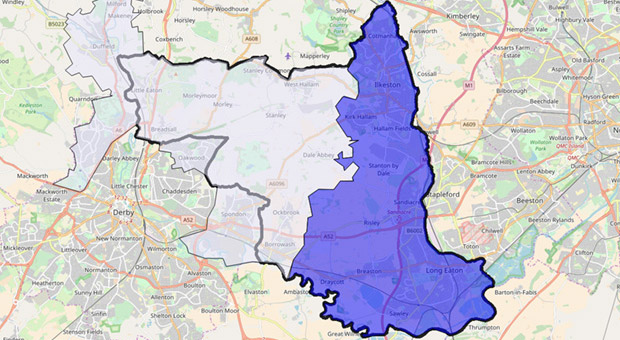 Erewash is a local government district and borough in eastern Derbyshire, England, to the east of Derby and the west of Nottingham.

The population of the district as taken at the 2011 Census was 112,081. It contains the towns of Ilkeston, Long Eaton and Sandiacre and fourteen civil parishes.

The borough was formed on 1st April 1974 by the merger of the Borough of Ilkeston, the Long Eaton urban district and part of South East Derbyshire Rural District.

The borough council’s headquarters are split between each of the main urban areas at Long Eaton and Ilkeston Town Halls.

Ilkeston is thought to have been founded in the 6th century AD, and was created a borough by Queen Victoria in 1887. Its major industries were traditionally coal mining, iron working and lace making but these have all disappeared in recent decades.

Ilkeston is still well-known these days for the Ilkeston Charter Fair, which celebrated its 750th anniversary in 2002. The Charter was granted by King Henry III in 1252, making the fair older than Nottingham’s famous Goose Fair and one of the largest street fairs in the Country.

Long Eaton is referred to as Aitone in the Domesday Book. In 1228 Aitone gained the suffix “Long” which was a reference to the length of the village. In the early days it consisted of little more than a few farms and cottages strung out between the parish church and what is now Main Street. It made up part of the parish of Sawley, which during the Middle Ages became a village of some importance, with Long Eaton under its jurisdiction.

The town developed around the lace-making industry and also the railway wagon industry in the nineteenth century. The Long Eaton railway station continues to thrive and is now on the Midland Main Line, which is a frequent service running to London.